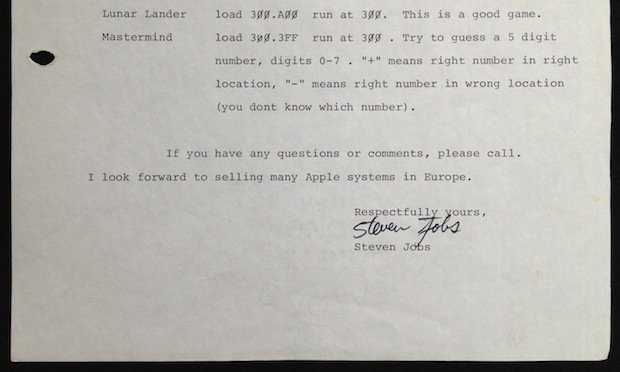 There are things in life that, although you see them coming, still hit you like a brick wall. And although you were sort of thinking you’d have enough time to deal with them, when they happen, you realize that you are in fact very ill prepared.

One day in early 1977, my father met Steve Jobs. And it was not just a brief handshake, either. The encounter over lunch led to the first Apple 1 computers being brought to Europe, to the basement of my family’s house, where my father had his microcomputer lab. I was 7 years old. The miraculous machine captured my imagination and has not let go of it since. Eventually the passion ignited in me and my brother that year led to the creation of Boinx Software, more than 20 years later.

The similarities between Steve Jobs and my dad don’t end with both being fascinated by technology and both having a profound influence on my life and my company. In April of this year, my father passed away. Incidentally, he died of the same cause as Steve Jobs, respiratory arrest caused by a metastatic tumor in the lungs. Like Steve Jobs, he did what he loved until just days before his death. Like Steve Jobs, what he loved was driving innovation at the company he founded. I was lucky to be at his bedside when he died.

When I saw Steve Jobs take the stage for the keynote at WWDC 2011 back in June, I immediately knew it would be his last keynote. Not only did he look like my father did just weeks before his death, he also had the same weak, almost squeaky voice. That morning I pondered whether I had seen enough Stevenotes and whether it would be worthwhile to jump through the hoops that Apple hands out before a keynote, including long waiting lines and „People Management“ like in Kindergarten. But when I saw Steve, I was glad I bothered to take that last chance to see the genius in action once more.

On October 5th, 2011, at 3pm I was sitting in a meeting room at 3 Infinite Loop in Cupertino, CA. I had come more than 5500 miles from my office to demo our latest creation, codenamed Ziegenbart, to a couple of Apple people. They liked it very much and so I left in a good mood. The weather, cold and rainy in the morning, had turned into a bright, nice, sunny Fall afternoon. When he showed me off in front of the building, my contact at Apple briefly wondered about Katie Cotton’s, Apple’s PR Manager, car parked seemingly in a hurry at the curb. „Where she is, Steve Jobs is not far away“, he said.

When I turned into the rental car return lot at San Francisco International 30 minutes later to return my car and check in for my trip back to Europe, I heard the news on the radio. Steve Jobs had died, an era had come to an end.

I never expected that I would be less than 10 miles away when it happened.